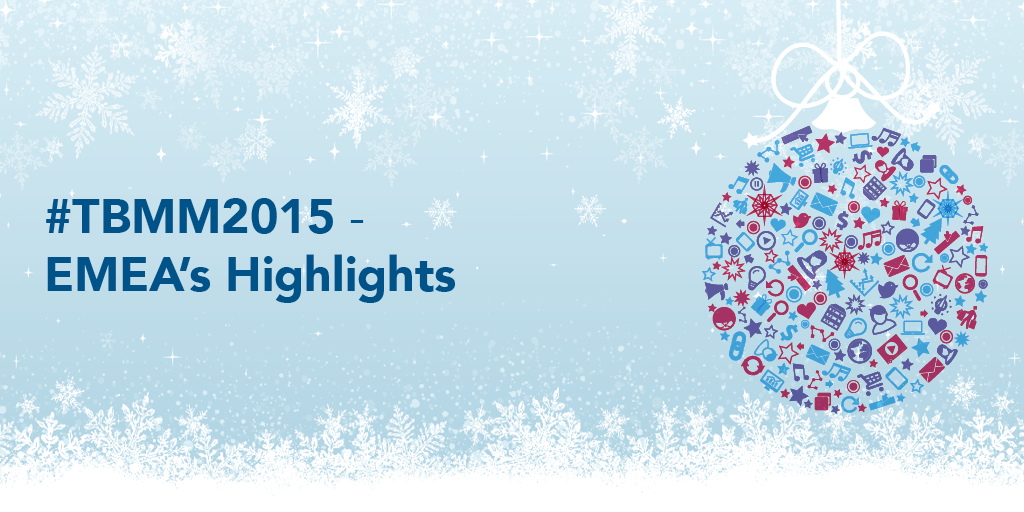 It’s been a big year at MediaMath across our global locations with EMEA as no exception.

To celebrate the finer points of the year, we are currently hosting a Twitter countdown to 2016 featuring a daily 2015 highlight throughout the month of December, which can be followed at @MediaMathEMEA or via the hashtag #TBMM2015.

Our year kicked off with a new office opening in Madrid where we hired Gonzalo Garcia as Country Manager for Spain and later Ishaq Platero as Commercial Director, Spain to help drive programmatic growth in the region.

Another significant appointment was that of Richard Beattie, Senior Vice President, Commercial, EMEA who brought with him a wealth of ad tech experience in sales and marketing from two tech giants – Oracle and Adobe.

The momentum snowballed with some great industry recognition and it was exciting to see not only NMI (New Marketing Institute) pick up two silver awards for Best Certification and Best Unique/Innovative Learning and Development Program but MediaMath EMEA picking up gold for Programmatic Company of the Year at the M&M Global Awards. The former reflects NMI’s endeavour to educate and empower marketing professionals while the latter acknowledges our deep commitment to our clients.

These awards could not have been achieved without the great people behind it and we in turn value our employees’ feedback highly. Having our employees vote us at number 3 in Glassdoor’s top 25 UK companies for pay and benefits as well as work/life balance was a real testament to our wonderful workforce and our support to them.

While we’re on the subject of our esteemed colleagues, Frith Fraser achieved industry recognition in The Drum’s 50 under 30 2015 and was featured as one of the young disruptors making their mark on digital.

No year is complete without key calendar events and so we returned to the French Riviera to Cannes where our CEO Joe Zawadzki presented at the new tech festival “Lions Innovation” – and then flew to Cologne for dmexco, both of which were even bigger and better than the year before.

Only recently we celebrated our one-year anniversary in France and acquired German programmatic company Spree7 to meet the growing demand for providing local programmatic solutions in Austria, Switzerland as well as Germany.

To top it all off, a proud moment was being welcomed onto the IAB UK Leadership Board which reached full capacity this year.

Who knows what 2016 will bring for MediaMath and the programmatic marketing industry as we go from strength to strength? What we do know is that 2015 has been a celebration for us and we would like to personally thank everyone – colleagues, clients, partners – for being a part of our journey this year.